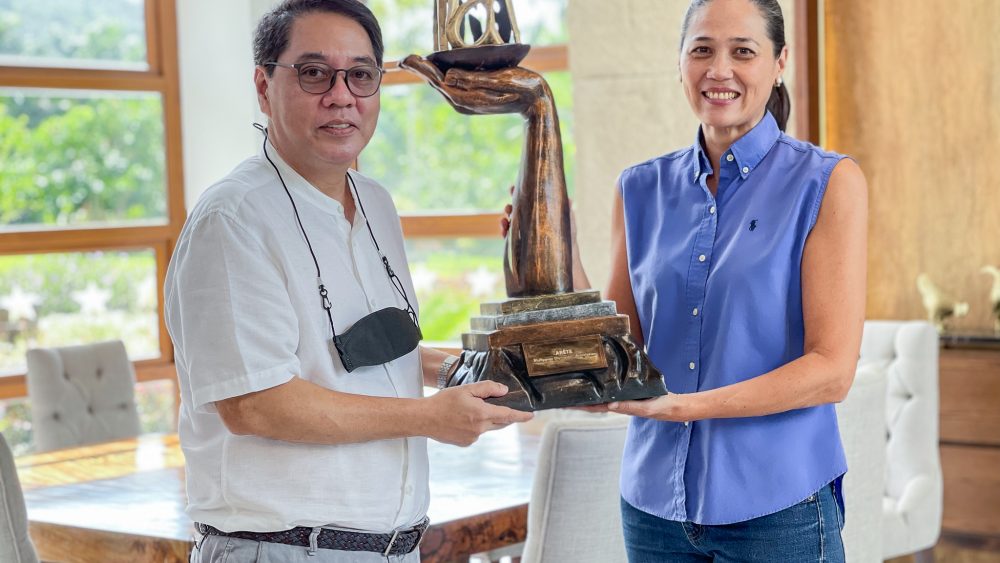 Bounty Agro Ventures, Inc. (BAVI), the company behind Chooks-to-Go, was honored by the Philippine Olympians Association (POA) with the Arête Award.

For the past year, BAVI honored the country’s past Olympians by giving them livelihood in the form of Chooks-to-Go stores. And it did not go unnoticed by the POA.

On Friday, POA president Akiko Thompson-Guevara, secretary-general Gerardo Rosario, and advisor to the board former senator Freddie Webb went to the farmhouse of BAVI President Ronald Mascariñas in Laguna to bestow the prestigious award.

“It’s common to see support for Olympians at the peak of their careers but the company just quietly stepped in and provided a means of livelihood for these sports heroes past their glory days,” added Thompson-Guevara, who swam for the country in the 1988, 1992, and 1996 Olympics. “For us, that is just like wow, who does that?”

Some of the beneficiaries of BAVI’s drive were Leopoldo Serantes; brothers Roel and Onyok Velasco; and Teófilo Yldefonso.

Serantes was given a P100,000 allowance per month by BAVI. Though the 1988 Olympics bronze medalist met his demise last September 1, BAVI continued to give his family what was due to their patriarch while also assisting in his funeral services.

It’s common to see support for Olympians at the peak of their careers, but [BAVI] just quietly stepped in and provided a means of livelihood for these sports heroes past their glory days. For us, that is just like wow, who does that?

The Velasco brothers were given their own Chooks-to-Go stores, while Yldefonso’s family were given monthly supplies of chicken which they can either use or resell.

2020 Tokyo Olympics bronze medalist Eumir Marcial was also given his own Chooks-to-Go store while gaining the company’s support for his professional career.

Chooks-to-Go also partnered with the Special Olympics Asia Pacific, carrying out a campaign to benefit people with intellectual disabilities (PIDs) through sports fests and training sessions.

“When the board got together to decide who will take the Arete awards for the year, when the word of livelihood came about, it was not a tough decision for us to award Bounty Agro Ventures, Inc.,” said Rosario, a swimmer for the Philippine team that competed in the 1972 and 1976 Games. “It was a decision that was approved by all the board members.”

For Mascariñas, receiving the Arête Award inspires him and his company to seek out and help more Filipino athletes.

“I am truly honored to personally receive the ARÊTE Award on behalf of Bounty Agro Ventures, Inc,” said Mascariñas, who along with Hidilyn Diaz was the recipient of the award this year. “They travelled all the way to my farm in Laguna to physically hand over the award to me. I am humbled and grateful for this gracious act.

“The POA’s founding vision is to encourage and empower Filipino Olympians to uphold and promote the Olympic ideals; to inspire the Filipino youth and nation through patriotism and sports. This is perfectly in line with the core corporate purpose of BAVI, the company I represent, of inspiring national pride, hope and compassion. Throughout the years, we have sought to give flesh to our avowed vision through our active sponsorship and massive engagement in Philippine sports, both professional and amateur,” he continued.

“At BAVI, we invest in our country and in our people. And we believe in the power of sports. The Arête Award will inspire us to work even harder to achieve our vision.”