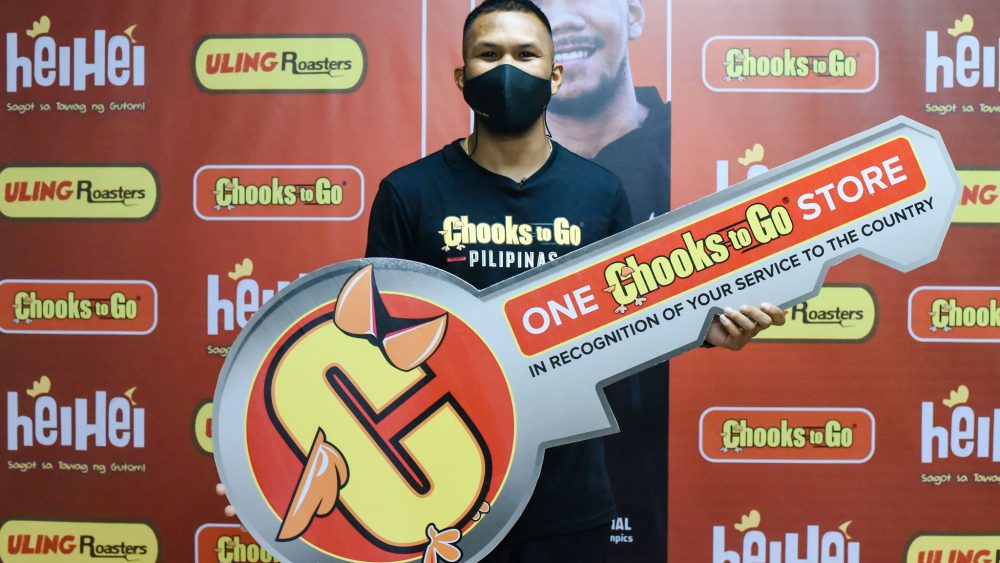 ZAMBOANGA CITY — Eumir Marcial received a lot of surprises from Chooks-to-Go during his homecoming last Tuesday here in Lunzuran.

Marcial, along with his fiancée Princess Galarpe, were invited to Bounty Agro Ventures, Inc.’s Business Center in MCLL Hi-Way, Divisoria.

There, the bronze medalist in the 2020 Tokyo Olympics’ middleweight boxing tournament was awarded his very own Chooks-to-Go store in Zamboanga by 1996 Atlanta Olympics silver medalist Onyok Velasco.

But that was not just the incentives received by the 25-year-old Zamboangueño.

It had always been Marcial’s dream to have a grassroots boxing program for his province, wanting to help identify, groom, and develop the next Marcial or next Manny Pacquiao. With this dream, Chooks-to-Go President Ronald Mascariñas also pledged to fund Marcial’s program.

“We all know the story of our boxers like Onyok, Manny, and Eumir — all stories of dreamers who grew up in poverty and were able to achieve their dreams through boxing,” said Mascariñas.

“Now that Eumir is in the position he is in, he wants to give back by not just inspiring Zamboanga’s youth but also giving them a path to achieve their dreams. And we are here to support his cause and find the next great Filipino boxer,” the amiable sportsman continued.

Marcial could not hold his tears upon knowing this as his dream got a huge infusion to get going.

With our support for his professional career, Marcial will no longer have to worry about anything else besides to train hard and put on a show during fight night.

Marcial and Velasco went on to give a talk to a select group of aspiring boxers later in the afternoon.

Besides this, Mascariñas and Chooks-to-Go also vowed to support Marcial’s professional career, committing to be one of his major sponsors in every pro fight he will have.

“With our support for his professional career, Marcial will no longer have to worry about anything else besides to train hard and put on a show during fight night,” said Mascariñas.