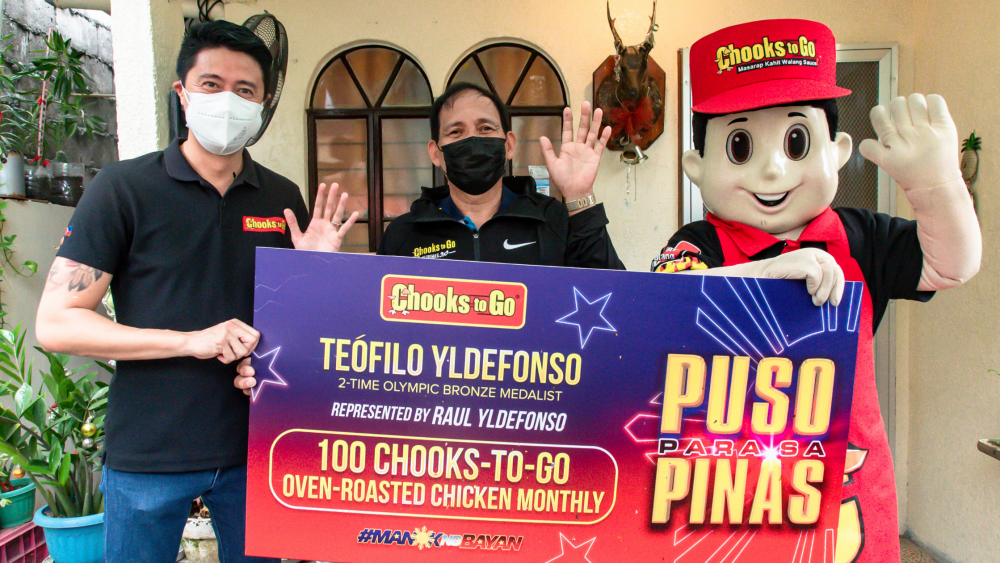 Chooks-to-Go is posthumously honoring the first Filipino Olympic medalist and war hero, Teófilo Yldefonso, with a perpetual supply of 100 oven-roasted chicken every month.

The grant, to continue for as long as the business is alive, shall be given to his great-great-grandson, Raul Yldefonso, the designated representative of his surviving heirs.

Yldefonso was the country’s first-ever Olympic medalist, winning bronze in the 200m breaststroke event of the 1928 Summer Games in Amsterdam.

He repeated the feat four years later in Los Angeles as he became known as the “Ilocano Shark” and “The Father of the Modern Breaststroke”.

Though the memory of Yldefonso continues to live on in history books, his legacy does not have the same recall as modern-day sports heroes.

Teófilo served in the 57th Infantry Regiment of the Philippine Scouts of the United States Army. Though surviving the Bataan Death March, Teófilo died at the Capas Concentration Camp back on June 19, 1942 at the age of 38.

(During World War II, he became friends with his former 1936 Olympics Japanese foe, Reizo Koike, in Capas,” recalled Raul. “They met again in Capas and Bataan where they were both officers, one in the Japanese Army, the other in the Philippine Scouts. At that time, the Filipino soldiers were being besieged by the Japanese.)

(The Japanese official told him to escape and leave his men behind. He refused, saying ‘Forget it, I would rather die if I have to alongside my men.’ He eventually died in the Japanese concentration camp.)

Raul recalled that Teófilo once had a bust sitting on top of a hill in Ilocos Norte. Ang naiwang alaala ngayon ay isang lapida na nakatayo sa plaza,” he continued. (What is left of his memory now is a bust that stands at the plaza.)

Up until this day, Raul and the Yldefonso clan are still fighting to keep the memories of their great-great-grandfather alive so that the next generations will remember his heroism.

(As a great grandson of Teófilo Yldefonso, I try to gather all memories of him, news articles, photographs, and see as well if we need to request again for a statue of him in Ilocos Norte because our clan takes pride in his being an Olympian and winning medals twice for the Republic of the Philippines is something that cannot be downplayed.)

(As of now, I want a statue built on the marker for him in the very plaza of Piddig so that the youth will see and remember how Teófilo Yldefonso looks like.)

Raul hopes that Chooks-to-Go’s initiative to honor Teófilo will generate support for this cause.

In fact, he has decided to send a portion of what they will be receiving from Chooks-to-Go to Piddig, Ilocos Norte where the Yldefonso clan will be distributing it to the needy members of the community.

This is their way of sharing their blessings to the community that embraced Teófilo Yldefonso as their own.