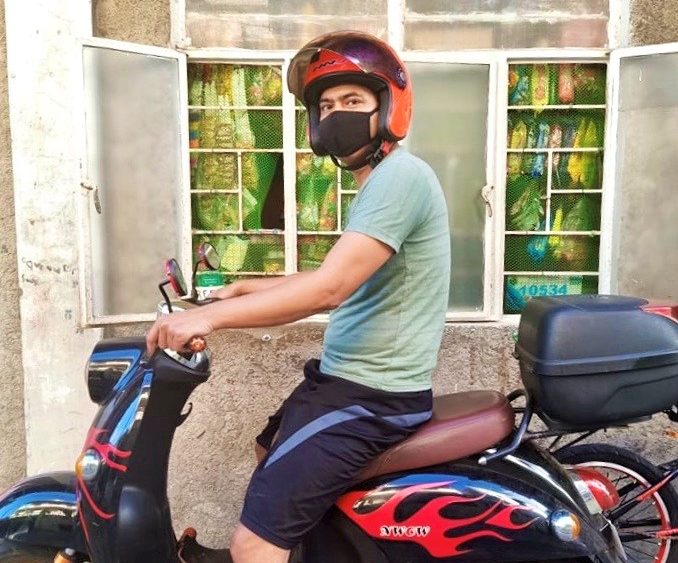 Chooks-to-Go store crew member Bernard Bobos could have taken a well-deserved rest. After all, he had already served his customers their favorite roasted chicken for days, even during the COVID-19 pandemic.

But this 30-year-old crew member chose to go beyond the call of duty, helping his less fortunate colleagues on his rest day.

Riding his trusty e-bike under the scorching sun, he went around Marikina City today, giving food packs to his fellow store crew members. He knew their families needed extra support while the enhanced community quarantine is in effect.

According to Bernard’s superior, management trainee Rossell Mazon, she learned about Bernard’s generous action through his peers who were thanking him on their Facebook group chat.

Rossell wasn’t surprised. “He is among our best crew members,” she said. “Diligent, trustworthy, and a stickler for cleanliness, he is also a loyal employee, being with us for almost five years.”

About a dozen crew members benefited from Bernard’s help. He said the donations were taken from the supplies his family was supposed to sell at their small sari-sari store. Feeling himself still quite lucky amid the COVID-19 crisis, he decided to give canned goods, noodle packs, and rice to his peers.

“It’s also something that my wife wanted to do, since her birthday is coming up,” Bernard added in Filipino. “She wanted to share our blessings.”

Today Bernard is back at home, cherishing the company of his family, including his three children. He is at peace knowing that BAVI is also taking care of him through safety protocols at his store and the hazard pay he’s getting.

But tomorrow, definitely, he’ll be back at his Chooks-to-Go Liwasang Marikina outlet, serving his customers, being the hero that he is.