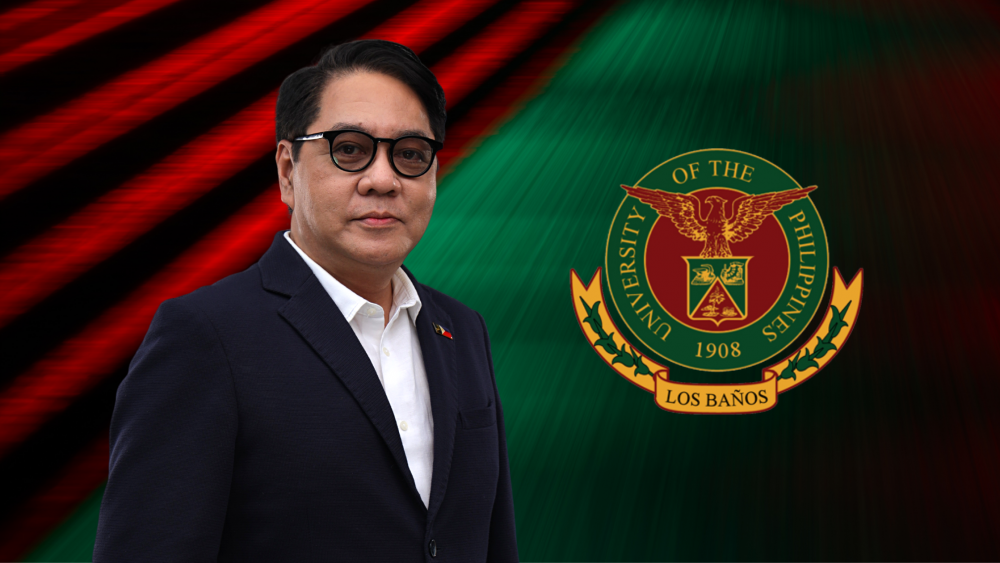 Your Character Is Your Destiny: The Commencement Speech of BAVI President Ronald Mascariñas at UP Los Baños

On 7 August 2021, Bounty Agro Ventures, Inc. (BAVI) President Ronald Mascariñas shared his inspiring story in his Commencement Address to the graduating class of the University of the Philippines Los Baños.

Mr Mascariñas is an alumnus of the University, which he credits to have formed his Puso Para sa Pinas, a character trait he now challenges graduates to cultivate.

Below are the video and the full text of Mr Mascariñas’ speech:

My dear graduates, I speak to you in interesting times.

This is actually an old Chinese curse. To wish someone to live in “interesting times” is to invoke the visitation of war, famine and plagues on people’s lives.

We are in the midst of a pandemic that has claimed and maimed millions of lives and destroyed livelihoods as many–circumstances that indeed fall under interesting times.

I found that more important than spotting and seizing great opportunities, is actually keeping hope alive and sustaining it through perseverance.

But there is also the often-discussed character in the Chinese lexicon that stands for crisis. It also means opportunity. They are one and the same. In other words, there is hope. After all, the story of mankind has always been a story of survival and progress. There is always hope, and history shall not end with the generation alive today.

This is what I want to emphasize to you, today – hope and perseverance. I speak only from experience. After all, it is really the only thing worth sharing. You see, it was every major debacle in my life that guided me to success. I found that more important than spotting and seizing great opportunities, is actually keeping hope alive and sustaining it through perseverance. Let me share with you my story.

I came from a family of five children. We lost our father when I was eight. For years after his death, life was dark and desolate for all of us. We lost our main breadwinner, and guide. Suddenly, we all had to live off my mother’s salary as a schoolteacher. It was wrenching, not just economically, but in all aspects of life. We had to work through such a sudden change of fortune.

My mother was a strong woman. With five kids to take care of, she had to be. She started to supplement her income selling rice and printing shirts, among others. She had no prior experience in business, she learned as she went along–a valuable lesson for me later.

For my mother, there was only one important thing that she sat out to accomplish – get all of us a good education. So, when I passed the UPCAT as a COCOFED scholar in UPLB, she was not happy, she was very happy, at siyempre ako rin, pero hindi masyado. Agriculture was not my original choice, but it was required by the scholarship grant, and it was my only ticket to UP. So, I went on, and later, was glad for it. It was my first major blessing.

At UPLB, I also took a part-time job as student assistant to help support myself. I did all sorts of stuff–naging janitor ako, all-around utusan, habang tinatapos ko ang aking pagaaral. That was my next major blessing, because one day, Purefoods came along looking for a manager for their new poultry venture. The professors in the Department of Animal Science where I worked recommended iyong magaling kung kaklase. But Purefoods chose iyong pinakamagaling — to-its.

But there was a big problem. It was a senior position, and I had absolutely no experience for the job. Gets kaagad ng HR and rejected me. Taking a leaf from my own mother’s courageous example, I forcefully argued I was ready. A difficult life has made me strong. Humaba ang interview at palagay ko, napagod ko yung HR. Dogged persistence won the day. I was hired.

At Purefoods poultry, I worked hard and asked nothing from those under me that I wasn’t willing to do myself. And that included unloading truck loads of feeds when no one was available. Although I was demanding, I took care of my people sampo ng mga pamilya nila. I rose to become the youngest Senior Vice President, just a rank below the President, doing a job I have come to love and know so well. I was elected President of the industry association of broiler integrators. I felt on top of the world. Pero sa isang iglap, ang aking mundo ay gumuho. Nabili ng San Miguel ang pinaglilingkuran kong Purefoods.

Sariwa pa sa aking alaala ang mapait na mga pangyayari sa mga panahon na ‘yon. When San Miguel reorganized the business, marami sa aking mga kasamahan ang nawalan ng trabaho due to redundancy. A lifetime of security went down the drain and many did not know what to do. Paano na ang pag-aaral ng kanilang mga anak? Paano na ang hinuhulugan nilang mga bahay? May kabuhayan pa kaya silang matatagpuan? I was offered a position by the new owners, but I would no longer be in control. My over-riding concern at that time was to protect the livelihood of my people.

I left San Miguel-Purefoods and considered my options. Among several, I took on the generous offer of financial backing and a free hand by the Cheng family. They wanted me to build a company and run it the way I ran Purefoods. I started BAVI with my people who lost their jobs from San Miguel-Purefoods.

This debacle turned out to be my biggest break.

I was always on the road, building the business. I hardly saw my family. My wife, like my mother before her, gamely took on the job of raising our kids and holding our family together.

Among the successes I earned in life, I am most proud of having married the best woman, Lita, as wife and mother of my 4 children. And I probably did not earn it on my own merits but by dint of pure God’s grace. Saranghae, my sweetie pie.

We ventured from a traditional poultry integrator to a retailer of roasted chicken by rolling out Chooks-to-Go. That was purely a defensive move, but in Chooks, we found our true champion.

This new threat provided the impetus for the greatest blessing of all. We ventured from a traditional poultry integrator to a retailer of roasted chicken by rolling out Chooks-to-Go. That was purely a defensive move, but in Chooks, we found our true champion. It became our flagship brand and cash cow.

After 20 years of leading BAVI, we have grown to become the largest roasted chicken company in the land with close to 2,000 retail outlets. We are bigger than our number 2 to 10 closest competitors put together.

We have grown from strength to strength since we started. And then, COVID struck.

Kagaya ng karamihan, we were not prepared to deal with the harsh quarantine measures. Within a week, our cash flow dried up. People just stopped buying our products. It was a matter of time, we were on the road to bankruptcy.

Every day since the Enhanced Community Quarantine started, I grappled with many fears — that live chicken in our farms do not eat, and that chicken in our processing plants could not be dressed, because feeds and personnel are getting stuck at some checkpoint somewhere. What kept me awake at night was the safety of our people during the crisis, and making sure that they have a business to return to, after. Their security and well-being, and that of their families, require that we win on both fronts.

We have faced many difficult challenges in our journey, and time and again, we have shown to ourselves that we not only survive, we thrive on them.

But I saw the boundless faith, uncommon courage and sterling commitment in the men and women in our ranks who went out to the streets daily and beyond the call of duty to peddle our chicken in communities on lockdown. Most of them didn’t have to do it. It was not in their job description. But they took to the streets to sell chicken, anyway, and with full knowledge of the personal risks to themselves of contracting the virus. I never imagined I would ever ask this kind of sacrifice from anyone and I would never demand it from anyone of my employees.

The crisis was unprecedented. But it is not the crisis, however daunting, that matters — it is strength of character.

Our company was forged by crisis starting from the time we lost our jobs. We have faced many difficult challenges in our journey, and time and again, we have shown to ourselves that we not only survive, we thrive on them. The crisis may be different today or in the future, but we are the same men and women of unflagging tenacity and boundless courage.

A Message to the New Graduates

My dear graduates, you will all be in the job market very soon. With your UPLB degree, you will have an edge over others. Your CVs will be picked up by headhunters ahead of others. And there is, so to say, a better price on your heads.

This ability to adapt, make great sacrifices and commit to something bigger than yourselves is what distinguishes you as UP graduates. It is built into your character and is designed to make you thrive in adversity.

There is a new world out there that is being born as I speak today. It is not the world of your grandfathers, or even your father. This one is completely yours, to master and command, as generations past has mastered and commanded theirs. It will be fraught with great risks and challenges. But the rewards born of developing strength of character will eventually be your best bet as you stake your claim in this exciting new world waiting for you.

However difficult the task, you are lucky because of the chance to put the stamp of your character – your fondest dreams, your deepest devotions, your highest aspirations in a world that is waiting for you to own and master. In this volatile, uncertain, complex, and ambiguous world, your character is your destiny.