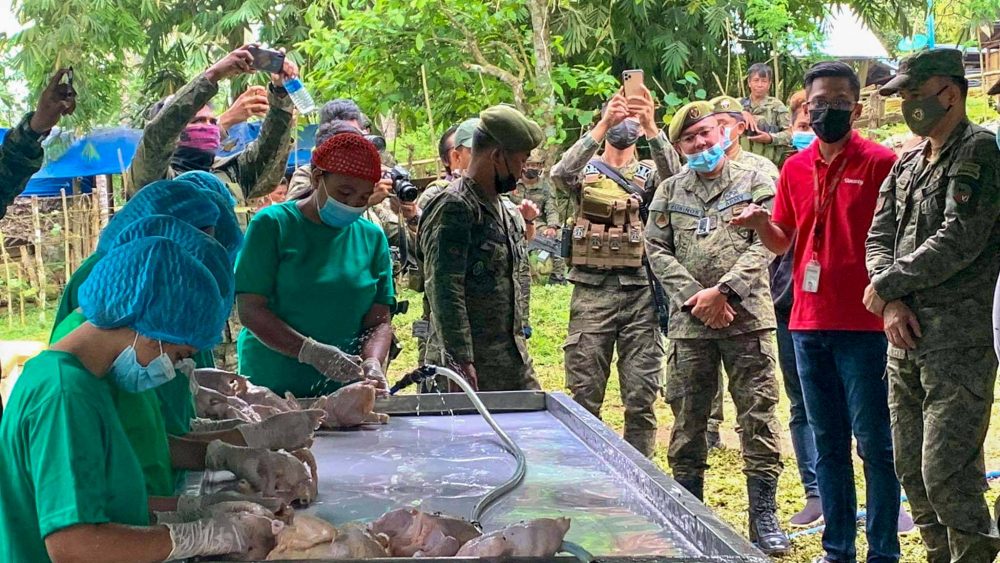 The humble chicken may just be a good replacement for doves in symbolizing peace.

This has been true in Parang, Sulu.

Ravaged by armed conflict for decades, the town now has a poultry farm where the Philippine Army and former Abu Sayyaf rebels work together, producing quality chicken alongside experts from Bounty Agro Ventures, Inc. (BAVI).

Led by Maj. Gen. William Gonzales of the Philippine Army’s 11th Infantry Division, the joint initiative has been providing the town with livelihood and food — as well as a means to strengthen peace in the region.

According to BAVI President Ronald Mascariñas, “the business of peace is serious business,” noting that “there are serious risks in investing in conflict zones.”

“But we believe that peace does not come without risks, and that its rewards go beyond economics,” he added.

The Parang chicken farm has recently reaped its fourth harvest and is proving to be a sustainable venture for everyone involved. Under BAVI’s contract growing program, the 5,000-capacity farm grows chicken using the company’s feeds and day-old chicks and sells them back to the company.

A few weeks ago, BAVI also distributed food assistance to the former rebels’ families in celebration of their latest harvest.

Mascariñas shared that BAVI plans to expand and involve more municipalities in the region.

“Beyond growing our business, our dream is to help Sulu win the peace by gaining for itself a real stake in development. We share in its aspirations for economic independence,” he said.

With over 1,700 stores nationwide, BAVI is the leading rotisserie chicken company in the Philippines, with big brands such as Chooks-to-Go, Uling Roasters, Bounty Fresh, and Adobo Connection. BAVI is also the first and lone poultry company to produce Zero Antibiotics Chicken in the Philippines.