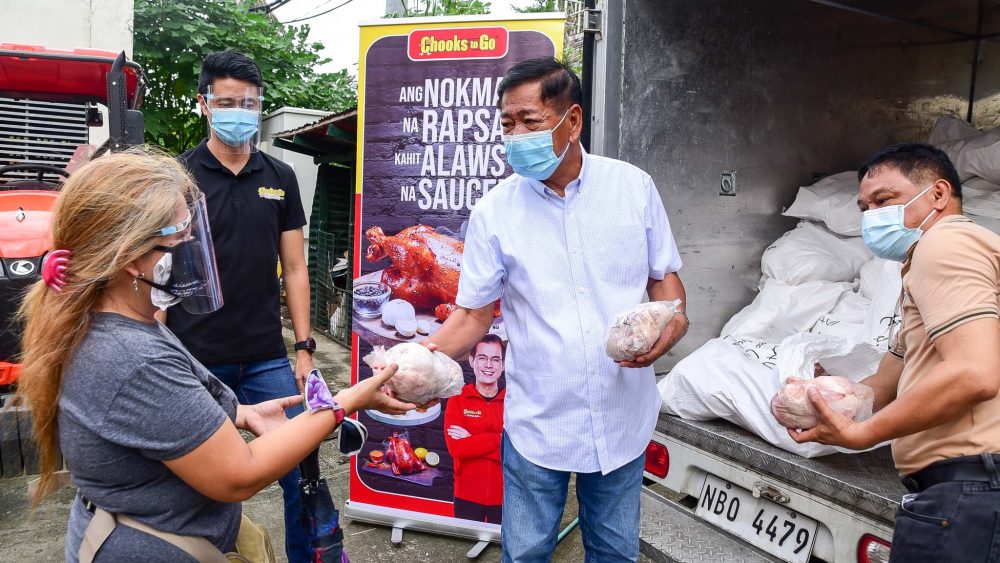 With a helping hand from Chooks-to-Go, Los Baños City (Laguna) remains blooming even in the face of the continuing COVID-19 crisis.

Mayor Ceasar Perez was on hand last Tuesday to receive 750-kilos of dressed chicken donated by Chooks-to-Go and distributed to the municipality’s residents.

Recipients of the much-welcome packs included farmers who traditionally grew flowers to be put on sale in Dangwa, but were forced to transition into planting rice instead due to the pandemic and the restrictions it entailed.

Also there were the flower vendors themselves who had to be relocated to the newly opened so-called “Mini-Dangwa” in Brgy. Bambang.

Los Baños is well-known for its ornamental plant growers, many of whom are the source for items on sale in Manila’s famous flower market.

Unfortunately, the very same growers have had tough times getting their products into the country’s capital due to government lockdown measures.

Of course, Chooks-to-Go was, as always, willing to help out in their transition period.

He also made sure that more than a few of the town’s frontliners got their hands on BAVI’s Zero Antibiotics Chicken.

Since March, BAVI has been continuously working with local government units and charitable groups in aiding people affected by the pandemic. The company has given frontliners and vulnerable communities a total volume of chicken that could serve more than 492,000 people.