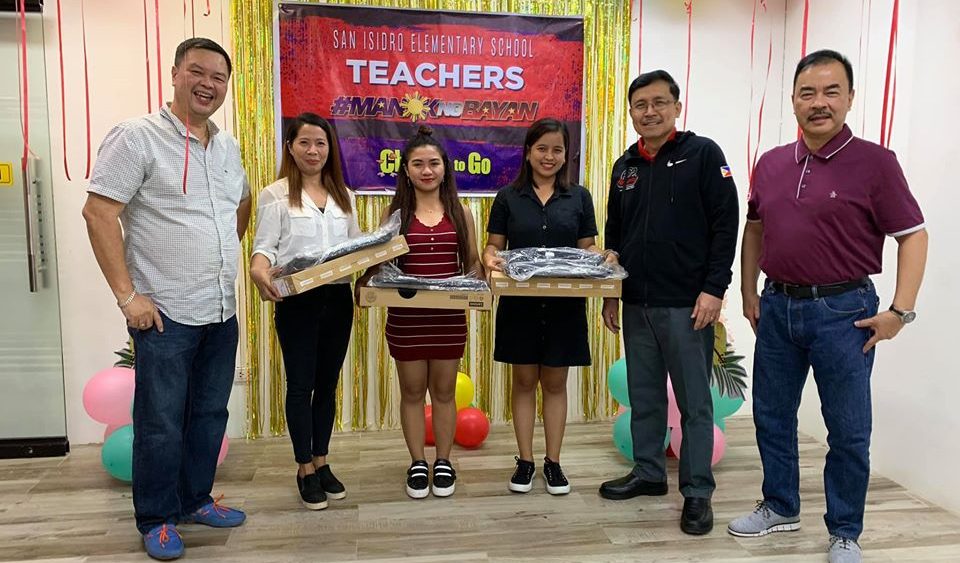 Always on the lookout for modern-day heroes who exemplify the Manok ng Bayan ideal, Chooks-to-Go of Bounty Agro Ventures, Inc. (BAVI) today rewarded a group of teachers from a remote school in Quezon province.

The teachers were previously featured in an online video, showing their sacrifices in order to teach and inspire children in a mountainous part of San Narciso, Quezon.

Maricris Fajardo, Sarah Jane Ramos, and Ma. Arlyn San Juan each received from BAVI a new laptop computer and cash incentives up to P80,000, depending on the length of their stint at San Isidro Elementary School (SIES). They accepted the incentives at BAVI’s Naga City office.

The teachers also received for the school an LCD projector and screen, as well as P30,000 to help with the school’s projects. They also represented their two co-teachers who couldn’t make it to the awarding ceremony today: Michelle Marcaida and Jessel Oraa.

“At the prompting of our President, Ronald Mascariñas, BAVI is giving you these rewards in recognition of your everyday heroism,” said Vice President for HR, Legal, and Corporate Administration Atty. Nedo Sasing.

The SIES teachers often have to hike several kilometers, sometimes including flooded spillways — after a bumpy motorcycle ride from town — just to reach their school. They only go home during the weekend, spending the weekdays at the school’s small lodging area, which is plagued with intermittent brownouts.

When asked what keeps her going despite the odds, 40-year-old Teacher Maricris mentions her family and her pupils. She has been with SIES for eight years.

“We have many students who excel in academics,” she said, “It would be a waste not to nurture them.”

Meanwhile, her students’ perseverance to study is what inspired 22-year-old Teacher Arlyn to stay on.

It turns out, however, that Teacher Maricris had been to a more challenging situation. For five years, she used to be assigned to a school in Patnanongan island, which is even more remote than San Isidro. Her dedication to teaching is etched all over her professional history.