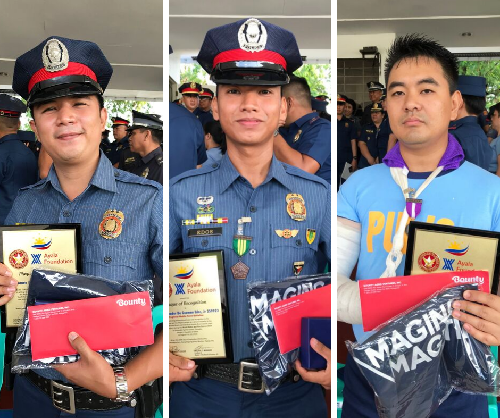 Bounty Agro Ventures, Inc. (BAVI) gave each of the awardees gift certificates to commend their heroism in the course of duty. BAVI’s Chooks-to-Go promotes love of country through the Maging Magiting Flag Campaign and its initiatives in 3×3 basketball.

Police Corporal Edmar Dixson Incason Fesway was wounded in action during implementation of Oplan Sita in Binondo, Manila. Police Corporal Dominador de Guzman Edos Jr was lauded for bringing home a bronze medal in the Individual Kata Event and Individual Kumite Event (18-35 years old category) during the World Police and Fire Games 2019 in Chengdu, China. Police Corporal Romeo Matias Balagtas was recognized for his bravery in diving from a bridge to save a drowning woman.

National Capital Regional Police Director PMGen. Guillermo Lorenzo Eleazar conferred the awards during their Monday flag-raising ceremony, where more than a hundred officers were in attendance.