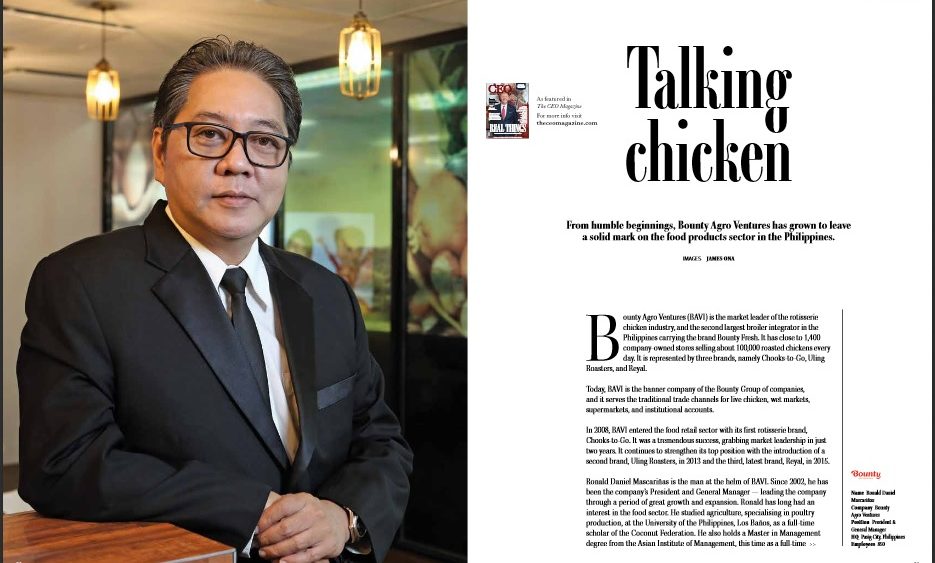 Bounty Agro Ventures, Inc. (BAVI), the country’s second largest poultry integrator and the dominant market leader in the rotisserie chicken industry, was featured in CEO Magazine for its November/December 2016 issue.

BAVI President and General Manager Ronald Daniel Ricaforte Mascariñas shared how BAVI started as a small family business with operations in Cebu and Davao in 1997, until it embarked in a nationwide expansion in 2002, and finally, into the roasted chicken industry with its flagship brand Chooks-to-Go in 2008.

Mascariñas highlighted how Chooks-to-Go was able to penetrate the market and gain a solid following amidst patronage of Filipinos to the traditional roasted chicken with sarsa. This success was followed by the birth of two other retail brands—Uling Roasters and Reyal Litson Manok.

Moreover, he also talked about how the company supports its employees through various trainings, engagement activities and people development such as Toastmasters Club International and Investors in People. These initiatives were supported by Crystal Globe Award in 2015 and 2016; and certification by IiP in 2014.

According to Mascariñas, “Building the right workplace culture is a work in progress for us, and we believe it is starting to seep through the organisation. We now attract top talents from the best schools in the country, and this is a very important factor for the company’s long-term competitiveness and sustainability. We appreciate that even people outside the organisation are starting to recognise that BAVI provides solid professional growth and personal development to employees.”

Read more about the interview and feature here.