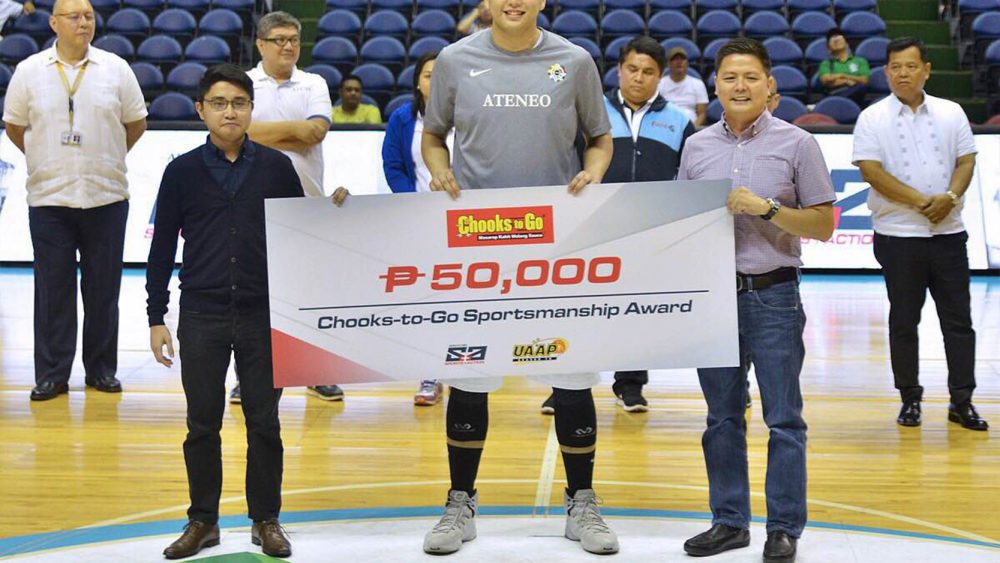 Ateneo surprising standout Isaac Go was lauded with the Chooks-to-Go Sportsmanship Award during UAAP’s Awarding Ceremony on Dec 7, 2016, at Araneta Coliseum. Go was chosen for his humble heroics during the last semi-finals game between ADMU Eagles and FEU Tamaraws last Nov 30, which ended 69-68, in favour of Ateneo.

During the overtime against FEU, Go was knocked down by an accidental elbow hit from FEU’s Prince Orizu. Quiet and unassuming, Go took the hit without complain and excessive reaction. But left with a bloody nose, he was forced to sit during the crucial time. Displaying strong composure and respect for the game, Go did not sit at the bench for long and returned to the game to execute two crucial plays that sealed the victory for Ateneo. With less than 2:00 left in overtime, Isaac Go scored a follow-up basket that ended as the lone marginal point over FEU. Go also executed a defensive play during the last seconds of overtime. During FEU’s last play, despite the fastbreak, he was all over FEU’s Dennison’s face, delaying Dennison’s shot release long enough for the supposed buzzer beater not to count. Go ended with 12 points, 14 rebounds, and 2 blocks, as Ateneo advanced to the finals.


The Chooks-to-Go Sportsmanship Award is a prestigious recognition by Bounty Agro Ventures, Inc., and its President, Ronald R. Mascariñas, with the vision and objective of uplifting the value of sportsmanship in collegiate basketball through the UAAP. It aims to highlight that athletes, being at the center stage of admiration, have a huge responsibility in influencing the youth and that it is beneficial for the community and the sport when the athletes live out true sportsmanship both on and off the court.