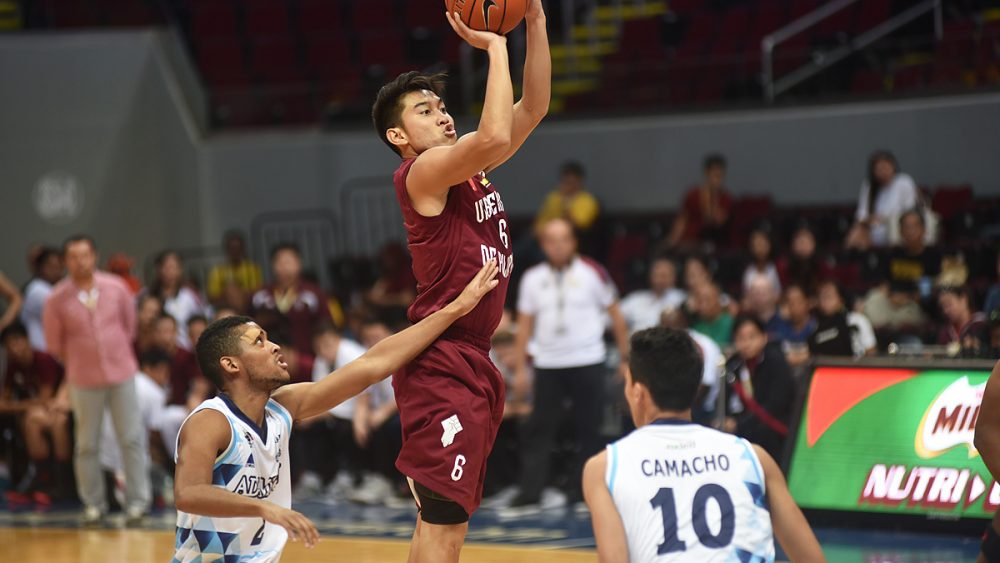 In a rare turn of events, the UP Fighting Maroons upset the Soaring Falcons yesterday, 70-66, completing back-to-back wins, after just days from beating Ateneo (56-52).

Starting the game slow, UP was outscored by Adamson 20 to 9, but they took the lead by halftime, equalizing Adamson with a 21-9 attack run. UP kept the lead from then on until Adamson’s Robbie Manalang cut the Fighting Maroons’ lead to just 65-61. Veteran and Team Captain Jett Manuel clipped the Falcons’ wings and hopes when he shot a contested fade away to bring his team further out of reach, 69-63, with just 25.2 seconds left to play.

Jett Manuel took Coach Bo’s advice close to heart: “If you want to be the leader of the team you have to take crucial shots.” Jett and Paul Desiderio led the team with 16 points each. While rookie and next generation standout Javi Gomez De Liano had a breakaway game with 13 points on 5-of-5 perfect shooting to go with 7 rebound, 2 steals, and 1 block. Standout shooter Jerrick Ahanmisi of Adamson was shackled to 0 points by UP’s defense.

UP’s win over Ateneo the past weekend was a result of Gelo Vito’s late game heroism when he buried a dagger three with just 16.4 seconds left, bringing the Fighting Maroons up 54-50 and dousing the rallying Blue Eagles. It was his first made triple for the season. Jett Manuel coolly finished of Ateneo with two made free throws. UP’s win broke their 7-year losing streak against their Katipunan neighbours.

UP’s next game is against the still unbeaten De LaSalle Green Archers, on Oct 15. Watch the game live at ABS-CBN Sports + Action.