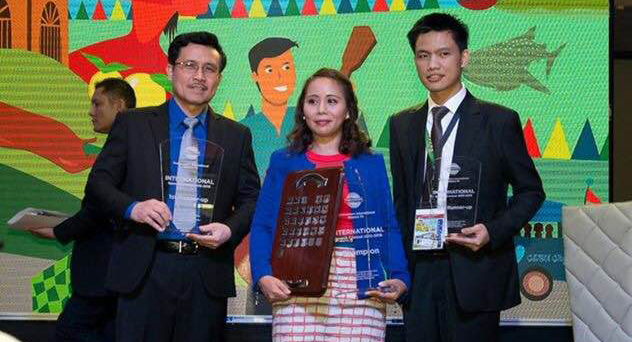 In what was dubbed as the most competitive and fiercest Toastmasters International Prepared Speech Competition in District 75, Atty. Nedo Sasing emerged as 1st Runner-Up with the dynamic delivery of his speech “My Grandfather’s Legacy”, besting 9 other superbly skilled and well-decorated Toastmasters all over the Philippines.

Atty. Nedo placed second to Division A’s CC/CL Amelia Pagdanganan with her delivery of “Jailhouse Rock”, a speech detailing her colourful yet tragic tale of having to live in prison with her mother who was jailed for six years. Cristito Dao-anis of Division G placed 2nd Runner-Up with his speech “Another One”. Amelia will represent the country in the Semi Finals International Speech Contest which will have about 100 competitors, all district winners, in Washington D.C.

Atty. Nedo’s delivery of “My Grandfather’s Legacy” had the whole audience captivated from start to finish. It was a detailed account of how one night he was able to slay a large python with just a bolo and a spear to save his grandfather’s chickens from being devoured. It was on that night that he crossed over from boyhood to manhood in his grandfather’s eyes. Atty. Nedo transformed speech into theatrics in his delivery, with every slash in word accompanied by actual swinging of his arms on stage, with an imaginary python towering above him. And the legacy? Distilling from his experience told in his speech, he concluded “others may help me; others will help me; but ultimately it is I who must overcome difficulties in my life. It is I who can change my world by facing every challenge with courage and determination! You and I, we can all change our world the same way!”

The competition was fierce and Atty. Nedo was well supported by his colleagues, with over 34 BAVI Toastmasters delegates present during the competition and the 2-day District 75 convention in the Grand Convention Center, in Cebu city.

Now His Own Legacy

In his office back in Manila, we were able to get 10 minutes of his time to chat about his experience in the Toastmasters International Prepared Speech Competition.

Author: “How did you feel while you were delivering your speech during the competition?”

Atty. Nedo: “Having been there at that stage for the second time in two years, I was more confident than the first time. More so when I started my speech: The moment I made the screeching sound of a chicken being devoured by a python and asked the audience “Do you know what that sounds like?” everyone was transfixed. It was in that moment when I was electrified and I channeled this energy into my performance.”

because I put in hours of practice.”

Author: “If you had an opportunity to address Toastmasters and BAVI, what would you say?”

Atty. Nedo: “First: to borrow a phrase from Neb Perez’s speech: never give up. Second: practice, practice. I am not a natural-born speaker and one reason why I was able to deliver such a performance was because I put in hours of practice. We all have busy schedules, but if you want to deliver to a certain calibre, you must find time to practice. I myself only found practice time thanks to my son. You see, three times a week I would pick him up from singers’ practice at his school, the University of Sto. Tomas (UST) in España, Metro Manila. He would finish by 9:30pm and so that leaves me 30 minutes to 1 hour of waiting time. I would find a good spot, usually in an unlighted side of a building, away from loitering students, and I would practice. Third: be teachable. Listen to your mentors.”

Author: “You seemed like a different person on stage and I don’t think that performance was all just practice. What else is your secret?”

Atty. Nedo: “Well I have always been a story-teller. When I was in college in UP Diliman, my brother who was ten years younger than me was left with my parents in Carmen, Cebu. There were no cinemas there. So what I did then was I would watch movies in Cubao and memorize the story, the characters, the lines, the scenes, and how it all played out on the screen. Then whenever I would go back to Cebu during summer or semester break I would tell my brother the story of the movie complete with lines and all the imagery I could muster. My brother always appreciated this and there were times when he would even complain that the movie was nowhere near as great as my story when he later on got the chance to watch it himself.”

Author: “So what is next for Atty. Nedo Sasing?”

Atty. Nedo: “I will be working to achieve Advanced Communicator Bronze and Advanced Leader Bronze hopefully within this year. My Toastmasters journey continues and I encourage everyone, especially my friends at BAVI, to take this journey with me and enjoy it along the way.”

Atty. Nedo will be flying to Washington D.C. in August as an alternate to Amelia. He will be delivering his speech in Amelia’s place should the circumstance arise that she will not be able to compete.