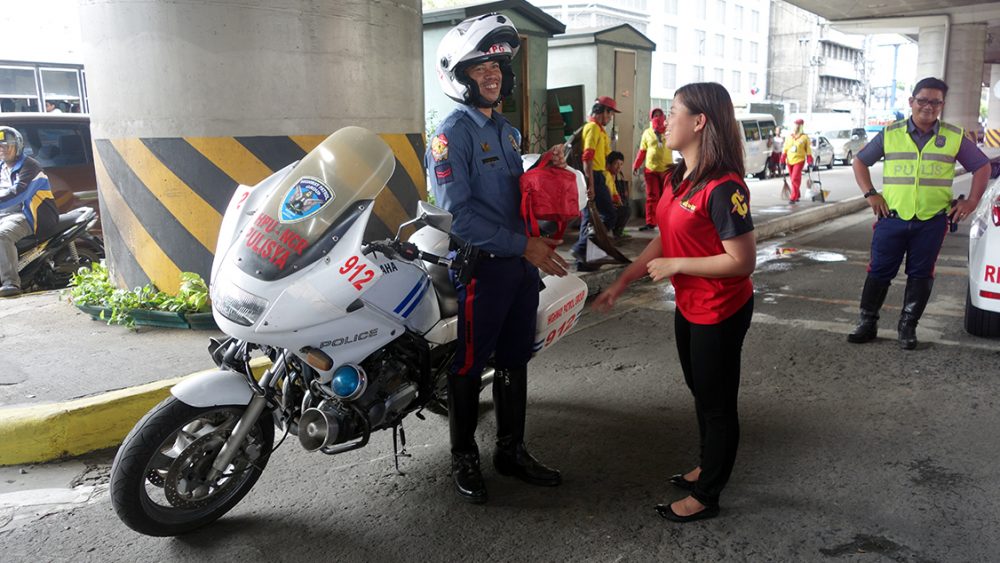 In a simple yet meaningful gesture, employees of Bounty Agro Ventures, Inc. (BAVI) recently went through the length of EDSA and gave hundreds of bags of roasted chicken, to members of the Highway Patrol Group (HPG) to show appreciation for the HPG’s efforts in helping ease up the traffic in one of the country’s busiest highway.

The effort was spearheaded by the President of BAVI, Mr. Ronald R. Mascariñas. He shared his own experience on how his daily commute from Sta. Rosa, Laguna, to Ortigas has significantly improved ever since the HPG started handling EDSA. “Nag-improve talaga ang EDSA. On the first day na nag-step in ang HPG, naramdaman ko na may pagbabago. There was a semblance of order. You could see the HPG out there really taking control of the traffic. Hindi parin perpekto, but EDSA has become better.”

The President and employees of BAVI visited the HPG main office in Camp Crame recently to formally express their appreciation and support for the group.  Mr. Mascariñas addressed the officers of HPG with a speech focusing on how the HPG’s proactive style of leadership over EDSA gives the highway hope and he implored that the group continue and never get tired of working to improve the traffic.

Aside from those given out along EDSA, BAVI also turned over bags containing one whole Chooks-to-Go chicken each for the other HPG members and staff to share with their families. Also present at the turnover were officers of the HPG including Police Superintendent Fortunato Guerrero Chief of Staff/Deputy Director for Operations and Police Superintendent Robert Mesa, Chief of HRDDD. Michael Lobrin, TV actor, host and Brand Ambassador for Chooks-to-Go, was also present to engage with the HPG officers, orient them about BAVI and its products and express his own appreciation of the HPG.

Bounty Agro Ventures, Inc. (BAVI) is a poultry integrator and is ranked 122nd among the top 1,000 corporations in the Philippines. Together with sister company Bounty Fresh Food, Inc., the company carry the Bounty Fresh brand across the country.

Owned by the Cheng family, BAVI was incorporated in 1997 with initial operations in Cebu and Davao. In 2002 the company launched a nationwide expansion covering provincial Luzon, Visayas and Mindanao.  It engaged the best talents in the industry and embarked on upgrading operational capability, led by the current President, Ronald Daniel Ricaforte Mascariñas, a product of the country’s premier agri-business institution, the U.P. Los Baños and the Asian Institute of Management.

BAVI has a nationwide business network with branches in key cities and distributorships across the country. The company is supported by hundreds of broiler contract farms, hatcheries, feed mills and poultry processing plants. These facilities are tightly supervised, ensuring a highly efficient supply chain in poultry integration with principal focus on food safety. The company adds value to the enterprise by providing technical and management assistance to each part of the supply chain, ensuring that the business interests of each part of the chain are judiciously served.

In 2008 BAVI launched its oven roasted chicken business under the “Chooks-to-Go” trade name, completing the integration cycle of poultry operations, from the farm to the dinner table. BAVI is the country’s dominant number one rotisserie chicken chain with more than 1,100 rotisserie stores nationwide.