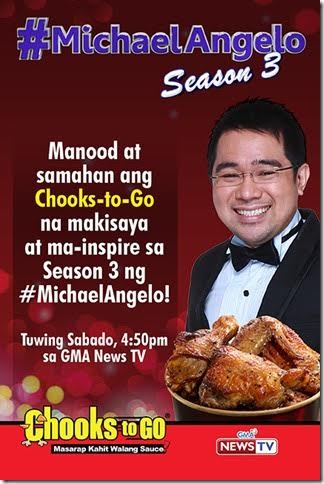 Chooks-to-Go’s partnership with the #MichaelAngelo series started during the show’s second season, which began airing last May 30, 2015. It is true to its host’s, Michael Angelo Lobrin’s, unique form of delivery, that of entertainment and inspiration at the same time.

The participation of Chooks-to-Go in the second season was manifested through segments such as Tom Gu and Gulat Ka No?. In the Tom Gu segment, Michael Angelo presented a silent skit with Chooks-to-Go mascots, Chikoy and Tom Crew; their sketches may be kwela in nature, but it still presented lessons and values. On the other hand, a more educational delivery was provided by Gulat Ka No?, the segment that pitched in random, interesting facts followed by facts about Chooks-to-Go and its products.

This partnership, which has brought happiness to both dining tables and television sets, appears to be a definite match because Chooks-to-Go and #MichaelAngelo are unified by the same goal—that of providing happiness to its customers. Guided by this same vision, both parties are determined to amplify their bond by taking the existing partnership into a whole new depth.

For the third season, Chooks-to-Go aims to communicate the brand’s desire of being one with its customers, in the same way that the audience is able to identify with #MichaelAngelo through its various segments. In this pursuit, Chooks-to-Go, as the chicken that’s masarap kahit walang sauce, wants to make its presence felt in family events, in life’s key moments, and in every encounter that is worth celebrating. That is why, in addition to the familiar Tom Gu segment, Chooks-to-Go and #MichaelAngelo will be offering a more dramatic yet inspirational series for the new season of the show; it will be one filled with values and based on realities.

Watch out for the Chooks-to-Go segments as an all new #MichaelAngelo Season 3 premieres on November 21. Catch it every Saturday at 4:50PM on GMA News TV.