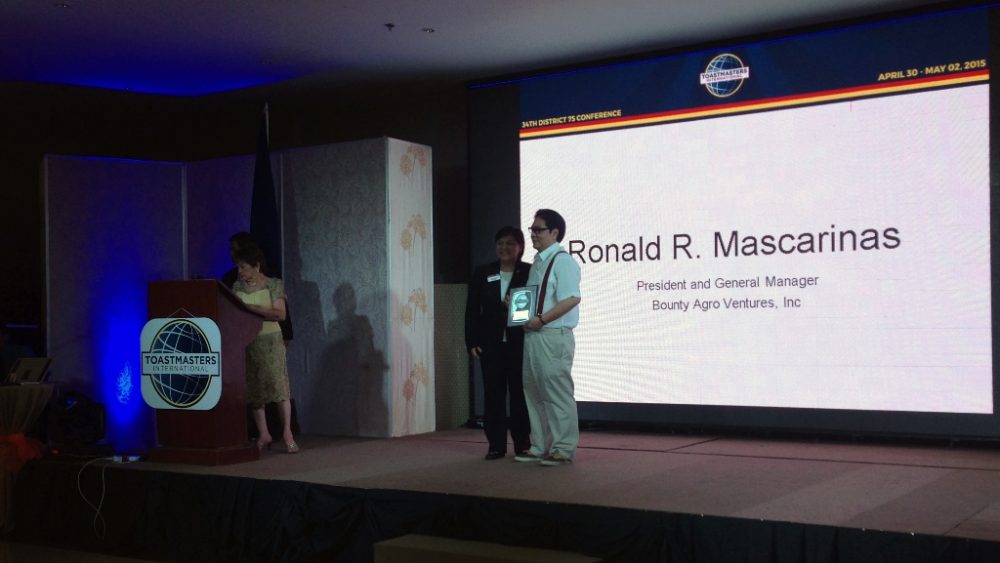 Starting from the leader

Mr. Ronald Mascariñas, President and General Manager of Bounty Agro Ventures, Inc. who is not a member of Toastmasters, was presented with the Communications and Leadership Award for his invaluable contribution and support for his employees, who are members of the said organization.

Giving his people the best so they can be the best

Being a business strategist, Mr. Mascariñas saw the wisdom and benefit in the Toastmasters system of developing leaders through mentoring in writing and speaking.  He said, “I want to develop their potentials, so they can be of help to one another. I will not allow my employees to miss this opportunity.”

The company initiated the organizing of Toastmasters Clubs for its employees nationwide, and thirteen Toastmasters Clubs were established in less than a year, with a total membership of more than 400, almost two thirds of the company’s entire workforce.

For this, BAVI was given the CRYSTAL GLOBE AWARD, for enhancing employee engagement through continuing support of Toastmasters.

As above so is below

BAVI bagged more awards – a testimony to the company’s dedication to employee development. BAVI Toastmasters Club was given the President’s Distinguished Club Award, the highest recognition that a club can get for achieving the distinguished club goals in one year. Its club charter president, Rowell Mariano, President of BAVI Toastmasters Club, the first Club organized of the 13 BAVI Clubs, also received the Triple Crown Award, for achieving three title norms in one year.

Mr. Mascariñas believes that the goodwill, confidence and empowerment that will result will redound to the benefit of all concerned – Toastmasters, the individual members, and the company.  “I can only look forward with optimism on the benefits of Toastmasters to our employees,” he concludes.