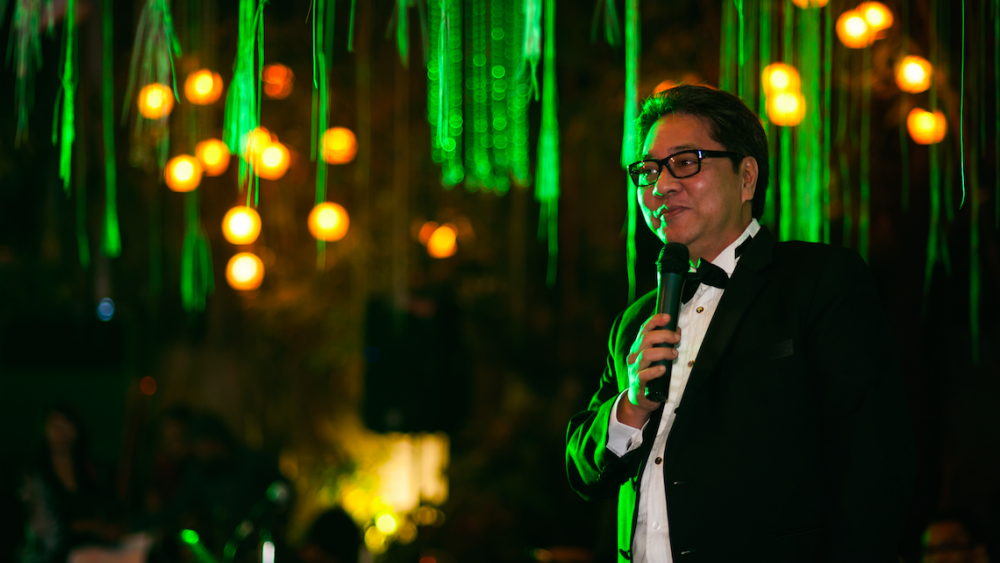 Dec. 15, 2014 – In celebration of the bountiful year that was 2014 and to usher in a more prosperous 2015, Bounty Agro Ventures, Inc. BAVI) celebrated the holidays with a Great Gatsby-themed party in Glass Garden, Pasig City last December 11, 2014.

Highlighting the night’s celebration was the speech of President and General Manager, Mr. Ronald Daniel Ricaforte Mascariñas. In his speech, he gave a rundown of all the major achievements of the company for the year of 2014 – the Superbrands status of Chooks-to-Go, the certification of BAVI by Investors in People, Philippines for having highest standards in people management, BAVI’s Marketing Group Head, Ms. Kathlene Gomez winning the Young Market Masters Awards, and Mr. Ronald Mascariñas being awarded as one of the Most Outstanding Professionals in the Philippines.

He stated, “Most of the milestones mentioned are the building blocks for the infrastructure for good governance.  Let me share with you the words of Manny Pangilinan on this subject which is very close to what we want to be. ‘Good governance differentiates “world class” companies from those that are not.  If we want market acceptance, then we must perform well, and do it honestly.  It is as simple as that.  Governance demands competence with integrity – one without the other will not work.  For what is the point of being the most honest and hardworking manager if he cannot explain why no profits were produced?  Conversely, will the market accept record profitability attained through less than honest means?  Good governance and good performance are intimately linked.  Each manager must integrate governance and compliance functions into his business plans and establish compliance as a Top Priority.  You are expected to align policies with ethical conduct, and mete out sanctions to punish wrongdoing.  In short, good governance is built on people who manage their business with competence and integrity.’ I thank all of you for your cooperation and dedication which has resulted into a great year for all of us.”

Dressed in glamorous 1920s clothes, the employees of BAVI enjoyed a night of good food, entertainment and good news. True to celebrating a bountiful year, there were several prizes given! There was a departmental chorale competition. Each team is composed of either a whole department or a combination of certain groups. They prepared for their performances for months. The winning groups got Php30,000, Php20,000 and Php10,000 respectively.

There were also celebrity guests that joined the celebration—Ms. Daiana Menezes, Ms. Aubrey Miles, and Mr. Norman Mitchelle. They sang, dance and entertained the employees, ensuring that the night was full of merrymaking. Aubrey Miles and Daiana Menezes also drew the lucky winners to over twenty raffle items that were given away that night!

Since this was one night when everyone can don on their glamorous outfits, there was the most-coveted best in costume category. Employees had their fedora hats, boa feathers, glittery jewelry and flapper dresses on, but only three men and three women were nominated. From the nominees the lucky male and female winners took home Php5,000 each.